Not sure how many of you have seen Frankie Ballard live but if you haven’t, you need to do so now! When I found out Frankie was scheduled to perform with Native Run and David Nail on 11/8/14 at the House of Blues in Boston and I knew I could not miss the opportunity to see this guy again!

I had purchased the VIP experience for Frankie and for anyone who loves Frankie, this is a must. After a little bit of waiting and being ushered into the lobby, Frankie and Eddie (his lead guitarist) entered the room, guitars in hand and smiles on faces. To break the ice Frankie asked if we all felt important since this was a VIP experience, and with everyone in laughter Frankie started the night off with a little acoustic rendition of his latest single and current #1 hit, Sunshine and Whiskey. As he was working his way to the chorus people started joining in and before you knew it the whole room was singing along with him. Judging by the smile on his face, you could tell he was never going to get tired of that. 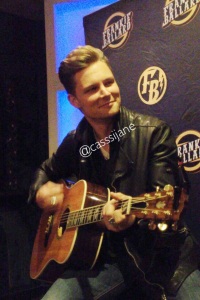 After Sunshine and Whiskey, Frankie opened the floor up to a little Q&A. Questions ranged from asking about the CMAs to a comment about knowing a local radio host. Now Frankie definitely has some sass in him so when a fan asked about his infatuation with anchors, he pulled out his necklace from under his shirt, leaned back a little and said “any time I just wanna drift a while; I just drop this in the sand and float”.

Moving on to the next part of the VIP experience Frankie asked if anyone had any requests. Some Bob Segar was thrown out there, along with Drinky Drink and one other song; Don’t Tell Mama I Was Drinking. With a few request floating around Frankie decided to do a never before mash-up. He started off with Don’t Tell Mama I Was Drinking and then slowly transitioned into Night Moves (we all witnessed a little “bro-moment” between Frankie and Eddie because of how smooth the transition was between songs). After a little Night Moves, Frankie ended the mash up with his first #1 hit, Helluva Life.

After the song Eddie left to go get ready for the show and everyone got the opportunity to take a picture and talk with Frankie. I’ve been to other meet and greets and they’re usually rushed but with Frankie, you actually get the chance to talk and interact with him instead of just a quick photo snap and off to the next person. There were a few gifts given to him; pictures, candy, even a flask with an anchor on it, but I think my gift might have caught him off guard a little bit; it was a customized guitar strap with his name on it. And I really hope he liked it! Everyone from the VIP received an autographed tour poster and a guitar pick necklace. Needless to say spending that extra money for the VIP was definitely worth it!

Now on to the main event!

After a few songs from the first opener, Native Run, it was Frankie’s turn to take the stage. He starts his set off with I Came to Git Down (which Frankie co-wrote and can be found on the new Big and Rich album Gravity).  After warming up the crowd Frankie eases into a song he wrote off his current album called It Don’t Take Much. Next up was Sunshine and Whiskey. Now this song got everyone singing and dancing while Frankie was rocking out on his guitar.

Continuing on with his set Frankie starts to play Young and Crazy and let me tell you, he takes those words to heart because when it came time to sing his next song, Bob Seger’s Old Time Rock and Roll, Frankie not only left the stage and went into the crowd, but he made his way up to the second floor and then climbed the balcony and light fixtures to get onto the third floor! After rocking out on the ledge of the third floor, he decided to make his way around to the bar and took a shot with a fan. As he attempted to make his way back to stage he not only commented that he got lost but also said that he got a nice butt squeeze from someone and he wasn’t sure if it was a guy or girl but he was definitely going to feel it in the morning!

After his little adventure, Frankie decided to slow things down a little bit and started to play the nights much anticipated song, Helluva Life. Being his first #1, you could tell this song had a special place in his heart and that he enjoyed playing it every single time. Everyone can relate to this song one way or another and that’s what makes it so amazing. It didn’t matter if you were there for Native Run, Frankie or David Nail, you sang along. Frankie ended his set with Drinky Drink which got the energy level back up and left everyone hyped up for the rest of the night! I think it’s safe to say that Frankie Ballard stole the show that night and nothing was going to top his performance. Frankie prides himself in being a great live performer and that’s exactly what he is without a doubt!

With two back to back #1 singles and a full 2015 touring schedule with Florida Georgia Line and Thomas Rhett, I think Frankie Ballard is definitely going to be a household name sooner rather than later!