This blog has taken a backseat in my life for a few very good reasons that I have been wanting to share with you guys for a couple of months now! I’ve honestly been so crazy busy that I haven’t gotten the chance!

At the end of March I interviewed for a position on the Street Team at my favorite country radio station, WPOR 101.9. Out of over 150 applicants, I managed to score one the coveted spots on the small Street Team representing WPOR and all of it’s sister stations. I worked a couple of events in April, but May was the big month for me when I realized that all of my hard work and dreams were turning into reality. (You can check out the Throwback Thursday post “Tour Bus Hang with Lee Brice” for more on that day!)

Since that day, I have been able to:

–May 29th, 2015: Attend a private show and meet Gary Allan, as well as photograph both the private event and the show itself.

–June 3rd, 2015: Photograph and meet Kelsea Ballerini at a private show on a boat in Casco Bay!

–June 4th, 2015: Photograph and meet Lady Antebellum at their show in Bangor, Maine along with Hunter Hayes and Kelsea Ballerini.

–June 26th, 2015: Photograph and meet Josh Dorr and Jillian Cardarelli at The Asylum in Portland Maine.

–July 8th, 2015: Help execute WPOR’s Party on the Pier featuring Jackie Lee, Canaan Smith and Easton Corbin. Had an “all access pass” that allowed me backstage and also got to meet all of the artists! 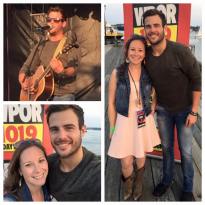 –July 10th, 2015: Meet Brett Eldredge and Darius Rucker! (Although for some reason the Darius photos are not posted on his website! So I have yet to see it! 😦 )

–August 7th, 2015: Meet and photograph both Drake White’s sound check party and the show that evening!

–August 9th, 2015: This day and experience really deserves it’s own entry! Probably one of the coolest experiences of my entire life. I’ll keep y’all wondering for a while! 😉

I will keep you guys posted on my adventures and experiences being a part of this world I’ve been dreaming of for so long! This blog has done it’s job! It has gotten me EXACTLY where I wanted to be!

Just this morning my boss greeted me with, “How’s the biggest country fan on the planet?”… and you know what… I love being just that and am thankful that my passion has led me into this overwhelming happiness that I can now call “my job”! Eeeeeeeek!