As soon as I learned two of my ultimate favorites, Kip Moore and Kelsea Ballerini, would be at the 95.5 The Bull’s 8th Annual Guitar Pull, I made it a goal to attend! As most of you all know, this was a “budget trip”, so funds were limited. Per usual, I reached out to 95.5 for a chance to win some tickets, but heard nothing back. As fate would have it, my friend Chris had a pair of tickets and became ill, and he graciously donated them to me! So appreciative beyond words for this opportunity to see these artists acoustically in a laid back setting.

Up first on stage was Hunter Hayes and Kelsea Ballerini! Kelsea started off by telling the crowd that her and Hunter are “real-life friends” and that he was actually with her when she found out that Dibs had reached number 1! (It appears that Cody Alan (her “favorite human”) was there too!

late last night, I got a call that my second single Dibs was the number one song on country radio. I was surrounded with many of my favorite people in the world. These moments are so precious and cherished, and ones that I'll hold in my heart forever. Sending giant hugs to everyone who has played this song on the radio, turned it up on the radio, sang it sassily to the person they like, downloaded it, and supported it. We just made history together. Gonna go cry now.

Kelsea performed her two number 1 hits, Dibs and Love Me Like You Mean It, as well as her new single Peter Pan! She also played us a NEW SONG off her upcoming album that she wrote, and it’s called High School, and it’s a story about someone who hasn’t quite matured yet or left the “high school phase”. It’s a beautiful song, and you can catch a couple clips of it in the snapchat story at the end of this post! I’m so proud of her and all that she has achieved in the past year and a half.

“This is five years later, and you can’t get off of the elevator
That’s going up, cause you’re growing up
And the world gets cruel, cause you’re still living in high school”

Check out a clip of Dibs below!

Hunter Hayes performed a few of his number 1 hits as well, and him and Kelsea took times going back and forth. Sorry for the blurry photos, we were quite a few rows back! 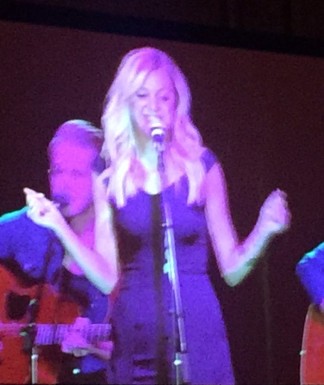 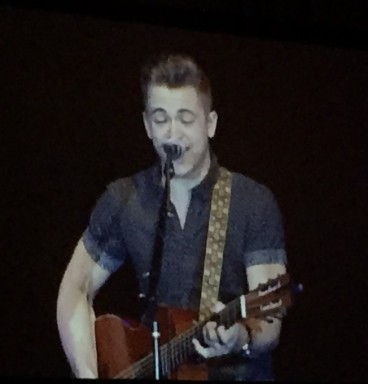 Next round of artists included Kip Moore, Justin Moore and Charles Kelley (of Lady Antebellum). Charles made sure to clear up any rumors or questions… NO, Lady A is NOT breaking up! They are just taking a break to focus on some personal projects and raising babies! These three up on stage together were HILARIOUS. Charles commented that him and Kip knew each other way too well, and their back and forth banter proved just that. Charles had clearly had a few beverages, and went as far as saying that Kip was going to take a dump when he left the stage (to most likely pee). Some good times were had by all!

Check out a clip of Kip singing My Baby’s Gone, which isn’t on either of his albums, but is a fan favorite at his shows. So, a new song for most of you, but not the ultimate Kip fans! 😉

There also happened to be three birthday’s that evening (Justin Moore’s was the day before on March 30th and Kip’s was the following day on April 1st) and the 95.5 morning crew (Lois and JoJo) encouraged the crowd to sing everyone a happy birthday! Check out that video below! Kip must have hated this, he’s always been “weird” about celebrating his birthday and letting anyone know when it is. He was a good sport though!

You can find a bunch more of the performances on my YouTube channel from all of the artists that night! There’s also a ton of 10 second clips on my snapchat video! But there is just one more special video that I would like to share with you guys… all of the artists on stage joined together for a cover of Hank Williams Jr’s Family Tradition and it was priceless! So amazing to watch!

If you’re new here, make sure to check out the first half of this day’s recap: ACM Week – Day 2 – Cali to Vegas for a special performance with Brandy Clark and a meet up with the VP of BBR Music Group! To see the very first day of the trip, check it out here: ACM Week – Day 1 – Maine to California! Can’t wait to share with you guys Day 3! Stay tuned!