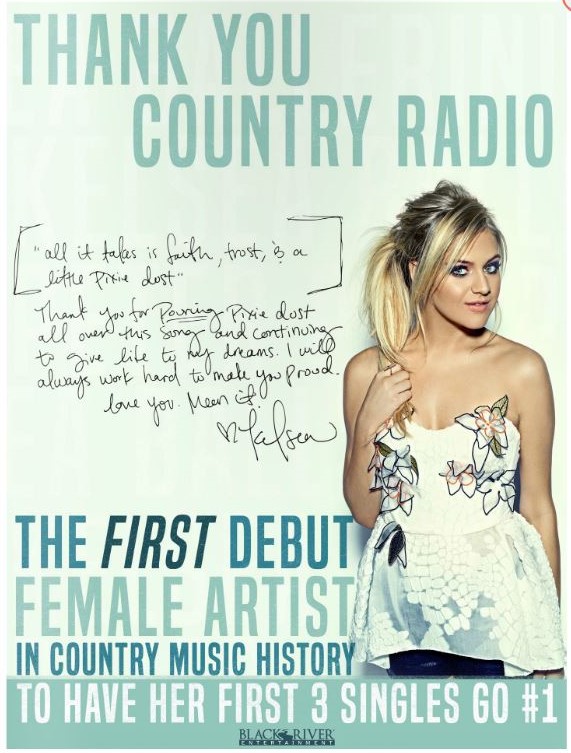 I am SO beyond proud of this wonderful, beautiful, humble, kind, bright and shining STAR! I’ve listened to her debut album so many times that it should be a crime. I’ve wholeheartedly supported her since day 1… and now she is the FIRST debut female artist in country music history to have her first 3 singles go #1! Can’t wait to see how far her next single, “Yeah Boy” goes! I’m willing to bet it will be another #1 for her career.

Love you. Mean it.

Did you hear that Brothers Osborne had a CD Release party at Bull Moose in Salem, New Hampshire the day before their debut album, Pawn Shop, was released?! If you weren’t one of the few lucky enough to attend, I captured the question and answer part of their acoustic performance for you guys to watch!

So technically, I was scheduled to work that Thursday, but when I found out on Tuesday morning that they would be about an hour and a half away from my house, AND there was an opportunity to meet them and get their CD before anyone else… I knew I had to go. I had to find SOME way to be there. They recently played in Portland, and sadly I had to miss the show and was very upset about it. THIS WAS MY CHANCE. Sooo… should I play hooky? Call out sick? I decided that honesty was the best policy (it usually is!) and I decided to just present the facts to my boss and see what she had to say about it. Luckily, she understands my passion/obsession for country music and networking within the industry and graciously allowed me to take the day off to go! When you truly want something guys, just have the courage to ASK!

You will never get what you truly want unless you ASK. Can't wait to see @brothersosborne tomorrow!!! 😘 #getyourDREAMon

END_OF_DOCUMENT_TOKEN_TO_BE_REPLACED

Opening weekend for Cole Swindell’s Down Home Tour kicked off in NYC on 11/11/15. I was lucky enough (and I don’t say that lightly…) to attend his Friday night show in Uncasville, CT in the very small and intimate Wolf Den at Mohegan Sun Casino. I don’t think I’ve ever worked so hard to get myself into a “first come/first seated” show with a maximum capacity of 350 people… total. For those of you who know who Cole Swindell is, you’ll know that he’s been playing sold out stadium shows with Jason Aldean and Kenny Chesney to crowds of over 50 thousand. For those of you who don’t… he is the 2015 ACM New Artist of the Year and someone whom I’ve been a fan of for at least 2.5 years now if not more! He is currently being sponsored by Monster Energy on their Outbreak Tour featuring “emerging” artists. I put that in quotes, because Cole emerged in my world well over two years ago. 2015 is the first year that the Outbreak Tour has added a “country” artist, and I’m pretty sure that they have been overwhelmed with the positive response in their choice. Cole and his Down Home Crew have been making a name for themselves in both the country music world as well as the fandoms.